Skip to content
Donaire gets more than he bargained for against Cesar Juarez... 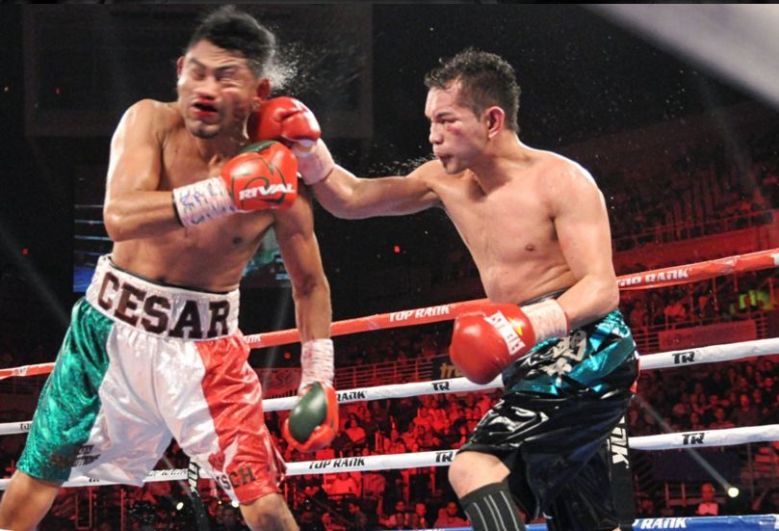 SAN JUAN, PUERTO RICO — The bloodied and bruised face of Nonito Donaire revealed the trial by fire he survived with Cesar Juarez to regain the WBO super bantamweight title.

Donaire dominated the early rounds with superb use of mid and long-range offense. The Filipino Flash made Juarez pay for his come-forward style with counter straight rights and left hooks and uppercuts. Although Donaire’s precision shots produced two knockdowns in the fourth, Juarez finished strong by pushing Donaire to the ropes with clubbing shots.

Juarez’s heart and recuperative powers proved to be a harbinger. No doubt fueled by the cheers of his countrymen, Juarez continued forcing Donaire to the ropes where he was vulnerable for wild but effective power shots. Donaire’s problems became compounded in the sixth when an errant slip and left foot injury compromised his mobility.

Donaire spent most of the middle rounds on the backfoot looking for big counters, causing him to lose most of these rounds on low activity. This allowed Juarez to land enough to produce a cut and pronounced left eye swelling.

Donaire’s power kept him from being overwhelmed in the championship rounds. His powerful counter shots did significant damage to Juarez’s nose in the 10th, and eye-catching hooks in the final two rounds halted Juarez’s pressure enough to the take a unanimous decision (116-110 twice, 117-109).

Donaire won the WBO title that was stripped for Guillermo Rigondeaux, who originally won the belt from Donaire in 2013.

“Tremendous fight! We give him so much respect. We gave it all.” – @filipinoflash https://t.co/OiO5jvkBHc