Skip to content
Highlights from the final press conference of Floyd Mayweather and Miguel Cotto. 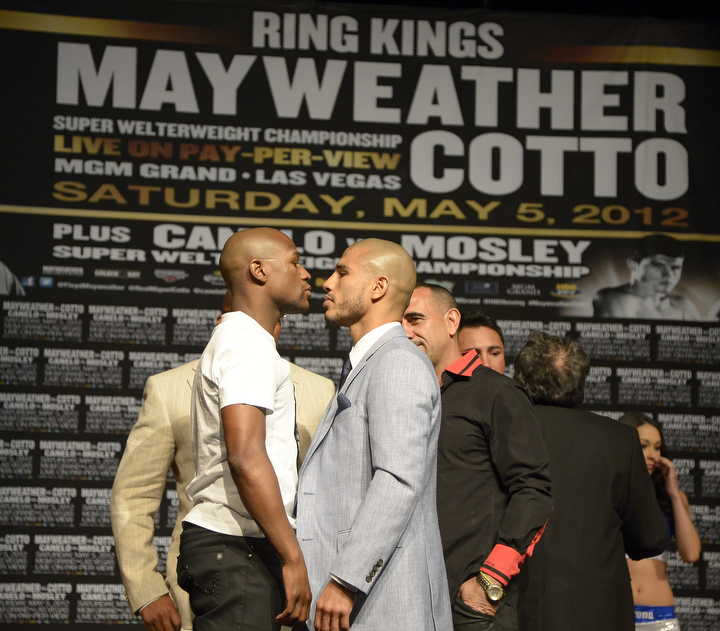 Floyd Mayweather and Miguel Cotto moved one step closer to battle with the completion of their final press conference yesterday. Tomorrow’s (May 4) weigh-in will be the last public appearance between the two before the big May 5 date.

Miguel is a true warrior, a tough champion and to go into the Hall Of Fame you have to face the best opponents.

This fight had to happen and I am glad that happened when Miguel was on his own, could call the shots and dictate what he wants.

Come May 5, I will be at my best. I have been here so many times that I know what it takes.

If I only would have been a defensive fighter, I would of not have lasted this long in this sport.

I’m not more relaxed than usual. It’s just I’ve been here. I embrace pressure. I look at it as just another day, another fight.

I’m a quiet guy and I prefer to talk in the ring.

I had a tremendous camp in Orlando. I put my trust in Pedro [Diaz], in every member of my team and, most importantly, myself.

No matter what, I am going to use what I have to fight Floyd. I’m prepared for his style.

I am going to be the first guy to beat Mayweather.

Everyone will see my strategy on May 5.

Miguel Cotto is a very classy champion and he has been for a number of years, but to Cotto’s trainer, talk doesn’t win fights, fighters do.

This has been our best training camp in the last 15 to 16 years. I can truly say that from a preparation standpoint, we brought in the best possible guys that Floyd could work with to be able to push him to the limit and that is what it takes to be at this level. He [Mayweather] took it upon himself to bring in young hungry lions to push him through training camp.

With his ability to come back like in his last performance in the Ortiz fight, I think the fans are going to see a much, much sharper Floyd Mayweather. Floyd is going to be prepared for whatever Miguel Cotto brings that night. Floyd will come out and dictate the pace.

I think the fans are going to see a great, great fight.

Come Saturday night, Floyd will be the new WBA Champion. He will be an eight-time world champion in five different weight classes.

Pedro Diaz worked with Miguel Cotto in his last fight and he did a tremendous job. He was the head of the Cuban national team for many years and he knows how to get fighters into shape. As we all know, Cuban fighters are always in tip top form and he is a great trainer.

Cotto should be undefeated.

He is a great fighter hailing out of Puerto Rico. He has fought many great champions. He is the current WBA super welterweight champion of the world.

He has held a world title every year since 2004 while winning 16 of his 18 world championship fights. He had a tremendous victory against Antonio Margarito. He showed his abilities in that fight and what he has learned with his new trainer. Therefore, he will come into the ring as a new man on May 5.

For five years, we have been working with Floyd Mayweather and it has been great.

Floyd Mayweather is the biggest pay-per-view star. He keeps bringing new innovations to the sport and takes the sport to a new level.

The early indication results are clear that this will be the biggest pay-per-view in the history of Puerto Rico.

24/7 was on TNT last night and I got some reports that it was a huge success. It was right after the NBA playoff game. The strong support is absolutely spectacular.

We will have fans watching [the fight] in bars and restaurants and in the movie theaters, but our biggest audience is the fans that will be at home watching it on pay-per-view.

This is a boxing card presented by the boxers to the fight fans and that is a great thing.

The ratings numbers are the biggest HBO has ever had for 24/7.

May 5 will be an unforgettable night for boxing.

A victory in boxing doesn’t come from talking. In boxing, your fists, the preparation and the execution gets you the victory.

“Ring Kings: Mayweather vs. Cotto,” a 12-round fight for Cotto’s WBA Super Welterweight World Championship and the vacant WBC Super Welterweight Diamond belt, is promoted by Mayweather Promotions, Golden Boy Promotions and Miguel Cotto Promotions. Also featured will be Canelo Alvarez vs. Sugar Shane Mosley, a 12-round fight for Canelo’s WBC Super Welterweight World Championship which is presented in association with Canelo Promotions and Sugar Shane Mosley Promotions and a 10-round welterweight fight featuring undefeated rising star Jessie Vargas and former World Champion Steve Forbes. Opening the pay-per-view broadcast will be a 10-round bout between super welterweight contender DeAndre Latimore and former World Champion Carlos Quintana which is presented in association with DiBella Entertainment. The mega event is sponsored by Corona, Hatfields & McCoys on HISTORY™, DeWalt Tools, AT&T, O’Reilly Auto Parts and Puebla – Cinco De Mayo and will take place Saturday, May 5 at the MGM Grand Garden Arena in Las Vegas and will be produced and distributed live by HBO Pay-Per-View® beginning at 9:00 p.m. ET/6:00 p.m. PT.